All students (boys and girls included) were very well-behaved in school. The teachers / lecturers / discipline masters / (insert name here) have no problem in handling students with discipline problem. Because students with discipline problems are very rare cases. Every student fears their teacher. Getting expelled from your own school isn’t nice. Being a teacher sure gives you an easy life isn’t it? So, if you have discipline problems, you are screwed, seriously. Ah yes, those were the students of the previous generation.
But today, Most of the students are getting out of control. Most of them are getting rebellious. Even discipline teachers have difficulties handling them. I would just say, discipline teachers think they made the right choice not to punish the students, especially those with brand new expensive cars. You see, students today are different from students from the previous generation. Try scolding or punishing a student for his wrongdoings and you will cry in vain because your ‘wife’ or ‘mistress’ will greet you with scars. You’d be lucky if it’s only a scar. Some serious cases will involve shattered windows and maybe a few punctured tyres.
My bro:

If you happen to be a discipline master, drive an old car to school. DO NOT
in any way attempt to show off your car, be it new or expensive to your
colleagues. It is better to be humble and drive your old 'wife'
or 'mistress' than to have scratches and scars on your new beloved
'wife' or 'mistress'.

This case is a true happening which happened during my dad’s school year in St. Thomas.
Let’s name this student A. He’s the son of another teacher which happened to be teaching in St. Thomas too. He had discipline problems but many teachers were unable (choosed not) to do anything out of respect for their female colleague (Student A’s mother). One teacher knew he had to do something because he cared for student A, so he reprimanded student A. In return, student A punctures his car tyres. Yes, all four of them. Imagine how you will feel if it is your car. Put that aside, this teacher had been very patient and kind, he did not report it to his mum. The second time, again he reprimanded student A because of his attitude and behavior in class. You know what the FUCK student A did? He poured acid unto that teacher’s car. Guess what happened next? That teacher reported to his mum? No. He died of heart attack (if I remember correctly, will confirm with my dad later). Sad isn’t it? My dad said he does not respect student A’s mum even though she’s a good teacher. If I was in my dad’s position. I’d look down on student A’s mum too. One of the reasons is because she is in no position to teach other students. Why? She had already failed in teaching her own son, what more to teach other students? Agree? It really is a sad case. I wonder what kind of future does student A have, probably a dark one.
Recently, there are many fights happening in schools, secondary schools in particular. The first one happened in Johor, a schoolboy fight. A gang of students against one student. The next one happened in Miri recently, which is very near to Kuching, my hometown. Guess what? Instead of a schoolboy fight, it IS a schoolgirl fight. Surprising isn’t it? I used to think that girls are very gentle and graceful, except few I could think of in my secondary school (those with discipline problems but they never really picked up a fight) and this video changed my mind. I could only shake my head sadly and sigh. What had actually happened to the students of today especially female students? Oh well, I am in no position to judge the students. The parents are to take the blame because being the first tutor and mentor of their own children; they should educate them with knowledge and wisdom especially in moral values because moral values among students are deteriorating. 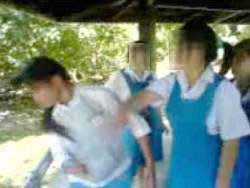 Picture taken from The Star
The Star:

This undated picture from a video taken from a website shows
a secondary school student slapping another girl at a beach in Miri, Sarawak.
The video, which also showed the other girls kicking, slapping, punching and
pulling the girl’s hair, was first circulated on mobile phones.

This is the video I am talking about, around 4 female bullies against a defenseless female student. How worse and sickening can it be when females act like animals? I can be sure that their parents will be ashamed of themselves when this video clip is exposed to them.
The Star:

A check with the police showed that there was no report of students being
assaulted.
SMK Joseph principal Marcus Gauliang said the school had
not received any report on the matter and that it could be the work of some
students trying to smear the school's image.

All I can comment on is that those bullies are immature brats and their parents HAD failed in becoming the role model for their own children. Sad case. Be it an acting to smear the school’s name or not. It’s not something to be played and act with.
Just my POV, this post is not directed to anyone.
Signed by Wei Liang at 9:00 PM