These few weeks, the choir practice went on and on, for the sake of presenting our best to all the Swinburne staff on the 11th of December. I just hope that my throat will recover by tomorrow morning as I had coughed and coughed during the singing… argh!

The final decision for the dress code would be black from top to bottom; formal wear. Cool eh? There would be around 20+ MIB (men in black) and WIB (women in black) singing for the Swinburne staff eh?

After church service and lunch, my parents and I went off to Parkson to get my black shirt and also to get a pair of new sandals for both me and my dad as our old ones are near to unusable. It was such a disappointment that Parkson did not have any proper black shirt and sandals were out of stock at such moments. Then we headed to Sarawak Plaza next to get my shirt and sandals. I met Yu King working part-time there, had a short conversation with him and moved on. I found the sandals suitable for me but not my dad (which means I don’t have to use my bro’s anymore as it was kinda troubling when he needs to use them too at the same time). The black shirts in Sarawak Plaza were scarce so that explains the high rate of discounts over there but the sizes left was only XXL and XL.

After trying out those sizes, it was concluded that it was too big for me and I would looked funny in it. The helpful staffs told us to head over to Tun Jugah as there were more choices and maybe I can get what I had wanted there. I finally found the right size though it is slightly more expensive than those I mentioned earlier. During the way back home, I realized that I had forgotten to get a dark-colored tie as mentioned in the notice for the dress code; luckily it is not compulsory… 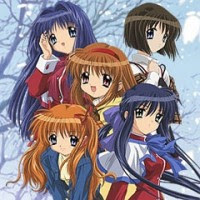 I’ve spent most of my weekends watching Kanon and Kanon 2006, it seems that Kanon 2006 had better graphics and animation; the characters are livelier as well. The story basically tells of Yuuichi Aizawa returning to this city after seven years. In his childhood, he often visited it, but something had happened in the past which caused him to erase and blank out all his memories of the events of seven years ago. On the day after he gets settled in with Nayuki Minase and her mum, Akiko Minase, he met a girl carrying a small bagpack with wings (of an angel IMO) on it. Her name is Tsukimiya Ayu and he began to recall the memories he had lost slowly. More characters were introduced in each new episode, bringing spark and life to the anime. I personally like the opening and ending theme of this anime and of course the quality of the graphics. :)
My aunt from Miri will be visiting us tomorrow, some major cleaning up was initiated since yesterday. She will be going to Singapore with my mum and my other aunts, uncles and grandparents (unsure) but I won’t be going due to the summer semester I am in. Well, going there wasn’t in my thoughts anyway, it would be weird if I bumped unto an old friend there and then go wordless like the first time we talked through the phone.

Alright… the final rehearsal for the choir presentation will be at 8.30am sharp in room 5.03, all the best to everyone! It will be only one shot, fail or get through it only. Mistakes will not be pardoned. Oh well, time for dinner, parents are calling. I guess I’ll stop here for now… Till then.
Signed by Wei Liang at 8:05 PM