The moment I entered Swinburne this morning, I was greeted by one of the seniors and directed to the enquiry area on the course that a freshmen should take. Only after I told them that I am a member of the Choir club, then I am free to go. The club booths are on the 5th floor (in those lecture rooms) and we shared the same room with the dancesport club. I only saw Farah alone, and then I realize that both of us were the only choir members present. The scheduled time was at 0900 but most of them arrived later. We headed off to the cafeteria and met Jeffrey along the way and the 3 of us went to the café since they had not taken their breakfast yet.

Slightly a few minutes away to 1000, almost all the members had arrived and we met at the lobby area. It was then decided that we split into groups of 2, the 1st group to buy decorations to decorate the lecture room and the 2nd group to fetch Chen aka Holy Knight to campus since he doesn’t have any transportation.

From here on, I’ll just summarize everything. The dance sport club presented 5 types of dances if I’m not mistaken. The choir club’s presentation followed next. We sang 2 songs and Farah soloed a song. Her voice is one of the high-pitched ones, second only to Irene, our conductor. During the free hours, we decorated the room with the decorations bought earlier. I had sushi and more sushi for lunch; courtesy of the Japanese Club (did I name it correctly?). Both dance sport and choir club made preparations for the next scheduled performance at 1400 and 1500 respectively.

Between 1400 and 1500, around 5 lecturers/staffs came to rate each club. I was told that the club with the best performance/speech/decorations will walk away with a hamper. The 3rd prize belongs to the Choir Club; the 2nd prize belongs to the Anime Club and the Roteract Club walked away with the 1st prize. I’ve heard a number of students complained saying that the Roteract Club had only a few books on display and they won the 1st prize, which is very unfair to all of the clubs. Well, no matter what they say, the judges’ results are final, no appealing or changes to be made. The Anime Club put on some toy models for display on their booth. Besides that, they cosplayed the characters from the anime – Death Note. Personally, I think that the 1st prize should belong to them, not the Roteract club. The members’ hard work pays off nicely.
It was then decided that we distribute the hamper among the members during the next meeting on Tuesday, 1300. So… all choir members, remember to be present during that day. Around 1400, we bid farewells and went our own way. 4 of us, Kelvin, Chen, Pei San and I followed Jeffrey’s car. He treated us lunch today at one of the café at Chong Lin Park before sending each of us back home.

Today, I came across a picture. 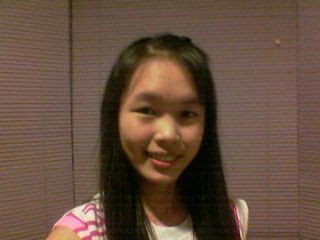 I thought it was Miss Melinda, my lecturer. But a closer look tells me that the person isn’t her. I guess I’ll need to get some rest for my eyes. She appears to be an old friend of mine.
Signed by Wei Liang at 11:32 PM

Rotaract club has what I call 'an energetic booth manner'.

Arr.. I saw this pic accidently. Then I wonder why this girl looks like my lecturer.. a closer look tells me I'm wrong lor.. (dont be suspicious lah......)