The last day of holiday

Today’s my last day of my 1 week holiday. Nothing much had happened (so I didn’t blog anything at all but I'm not slacking ok? XD). 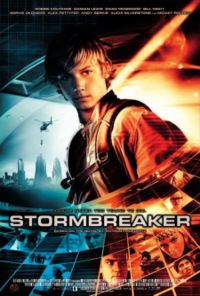 Went out for a movie with friends on Wednesday and watched ‘The Stormbreaker’ the overall storyline is kinda boring and predictable but heck, I’d give it 3 out of 5 for some cool stuns and effect. I met an old friend Lawrence on the way to the cinema and chatted for awhile since we did not keep in touch, I also met Irene and her group of friends and the Anime club too (they were going to watch ‘DeathNote’). It was also the day I tried ‘kueh chap’ for the first time. It doesn't taste too bad though I specially ordered one without the body organs as I had a bad experience with them when I was still a child.

<-- They say he is very handsome to attract gals to watch this movie. What do you think?
I had my MUET exam yesterday morning till noon. It was easier than I had expected as I was only worried about the writing part since I heard many told me that for the writing part, you have to write 10 points and so on. I just hope I don’t screw this exam since I had not even took MUET tuition classes or even look through the reference books. Anyway, it’s over, no point to worry about it.

Looked through the timetable for summer semester and became wordless. It was then I understood why Jacqueline said the timetable sucks. Classes start at 8.30am in the morning and ends at 9.30pm at night when there are only 3 subjects for the coming semester (there are only 11 hours for a week which means there’s a chance you might or might not be assigned to the 6.30pm to 9.30pm time slot).

Recently, I realized that I had lost most of my feelings and emotions for those around me and always bury myself in animes, games, books and bowling to use up my free time and divert my attention to something else. So please don’t get angry or blame me if I don’t understand what the heck you are trying to say if you use emotions to talk to me. I’m still my old self though, I don’t smile, but I laugh. I was wondering – a guy without emotions is immune to feminine tears. I said that because there’s a young lady in my Bs3 clan which I am close with would always play around with us and usually say “I cry for you to see T_T…” to me when I laugh at her or make fun of her (I know I’m evil but it’s just for fun) such words also made me stop what I was saying and console her. She is attached in the real world (i think), just that I’m her ‘honey’ in Bs3. You know, the virtual relationship, but both of us know our limits and never go beyond the point. Coupling in Bs3 is as popular as in online games and I’m not the only one… XD

I never knew that my actions had caused trouble to a good friend of mine in secondary school (currently Lower 6) as he became the middleman for my problems and was teased by many people due to the misunderstandings and his popularity. Hahaha… I shouldn’t be laughing. Anyway he had his revenge on 1 of the many though. Well, I gotta be more careful with my actions in the coming days. Which means no more smsing her. (Well I had not even play smses with her since early September 13th ).

SO PLEASE DON’T SPREAD ANY RUMORS OR ANY OLD NEWS ABOUT ME DAMMIT!

Those are old news and past happenings, which are untrue about me anymore. Don’t go around gossiping saying I’m with so and so when you do not even know what is happening around me. Let me tell you, you wouldn’t like it when others gossip about you and someone else right? Sigh, it is your mouth and tongue; I can deny what you say but I have no rights to stop you from saying anything. Makes me recalled this – “my love for you is true, you can reject it but you have no rights to ask me not to love you.” I wonder which movie that was from.

Pardon me. Just that sometimes recalling that incident in F3 really sparks my anger. Trusting friends to keep a secret seem impossible, then why the heck do you ask me to share with you all and promised to keep it a secret between us only? If history repeats again, we’ll see what happens then. I’m trying my best to prevent it from happening again so don’t try me. I’m serious with my words. What I am trying to say is that I’m single. Not attached to anyone. I’m unsure when I would be ready to involve myself in relationships again. Nobody knows when that would be, even I myself don’t know.

Jeffrey’s birthday fell on 9th November. So here I am again to wish you a very Happy Birthday and may all your dreams and wishes come true!
Signed by Wei Liang at 8:12 AM