Again, let me share a joke with all of you before I proceed with monotone droning...

Why Did The Chicken Cross The Road?

Why did the chicken cross the road? We asked a variety of people about this:

BARACK OBAMA: The chicken crossed the road because it was time for a change! The chicken wanted change!

JOHN McCAIN: My friends, that chicken crossed the road because he recognized the need to engage in cooperation and dialogue with all the chickens on the other side of the road.

HILLARY CLINTON: When I was First Lady, I personally helped that little chicken to cross the road. This experience makes me uniquely qualified to ensure right from Day One that every chicken in this country gets the chance it deserves to cross the road. But then, this really isn't about me.

GEORGE W. BUSH: We don't really care why the chicken crossed the road. We just want to know if the chicken is on our side of the road, or not. The chicken is either against us, or for us. There is no middle ground here.

COLIN POWELL: Now to the left of the screen, you can clearly see the satellite image of the chicken crossing the road.

BILL CLINTON: I did not cross the road with that chicken. What is your definition of chicken?

AL GORE: I invented the chicken.

JOHN KERRY: Although I voted to let the chicken cross the road, I am now against it! It was the wrong road to cross, and I was misled about the chicken's intentions. I am not for it now, and will remain against it.

OPRAH: Well, I understand that the chicken is having problems, which is why he wants to cross this road so bad. So instead of having the chicken learn from his mistakes and take falls, which is a part of life, I'm going to give this chicken a car so that he can just drive across the road and not live his life like the rest of the chickens.

ANDERSON COOPER, CNN: We have reason to believe there is a chicken, but we have not yet been allowed to have access to the other side of the road.

MARTHA STEWART: No one called me to warn me which way that chicken was going. I had a standing order at the Farmer's Market to sell my eggs when the price dropped to a certain level. No little bird gave me any insider information.

ERNEST HEMINGWAY: To die in the rain, alone.

ARISTOTLE: It is the nature of chickens to cross the road.

JOHN LENNON: Imagine all the chickens in the world crossing roads together, in peace.

BILL GATES: I have just released eChicken2008, which will not only cross roads, but will lay eggs, file your important documents, and balance your checkbook. Internet Explorer is an integral part of eChicken2008. This new platform is much more stable and will never crash.

ALBERT EINSTEIN: Did the chicken really cross the road, or did the road move beneath the chicken?

COLONEL SANDERS (KFC): Did I miss one? Damn.
*******
I went to Genting last week. To be honest, I wasn’t in the mood to go anywhere because I am very worried and nervous of my results. But since my dad said that we should at least visit Genting once, I tagged along.
We used AirAsia to KL, and guess what? First they re-timed our flight from 11am to 1pm, never mind that. They told us to go to Gate 1 to board the plane, when we reach gate 1, the person in charge told us that it has changed to Gate 7.

So there we are, waiting at gate 7 till near-boarding time when there’s another announcement telling all the passengers that the boarding gate has changed to Gate 1 again. I’m sure I heard one American saying “What the hell?” loudly. Lol. 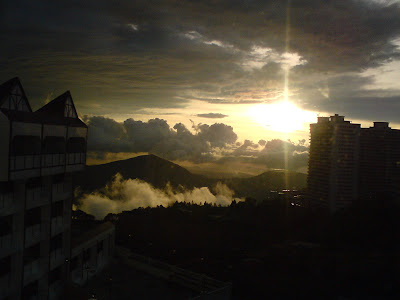 Here’s a view of the hotel we are staying at.

Then we visited the casinos, there are everywhere. The sad thing is, I cannot enter!

I’ve no idea when police are enforced to guard the entrance. There used to be no police at all, as long as you have money, you can go in. So suay lor.. 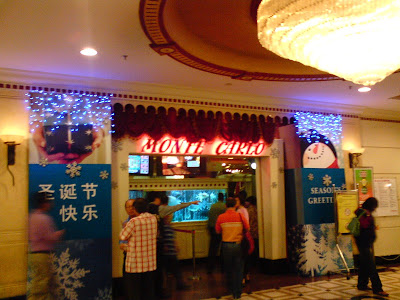 One of the casinos 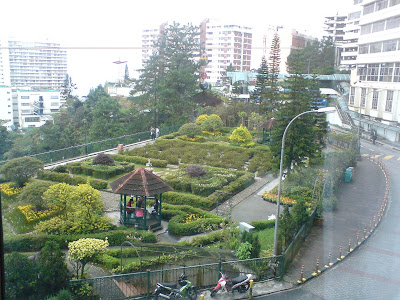 The garden (taken at the restaurant providing breakfast)

Next morning, I wasn’t in the mood to enjoy myself at the theme park so I gave excuses not to go in. I mean, how can you enjoy yourself while your worries are completely focused on your results right? You wouldn’t enjoy the theme park anymore and going in would be a waste.

Other pics are with my dad, will take from him some time later...

Results were released today. If you see me blogging here, it’s got to be good news or else there will be no new entry from me…

I prayed again and again hoping that I would pass because I did not do well in 2 out of the 3 subjects. So in the end I get:

Ok, I’m not the only one being ecstatic here. I’ve seen other’s results and they did fine too… I guess this will be a good CNY for everyone…

P.S: I’m not trying to say that by not studying hard and just praying, you can get what you want. Always remember that if you want God to help you, help yourself first.
Signed by Wei Liang at 3:30 PM

Always remember that if you want God to help you, help yourself first.